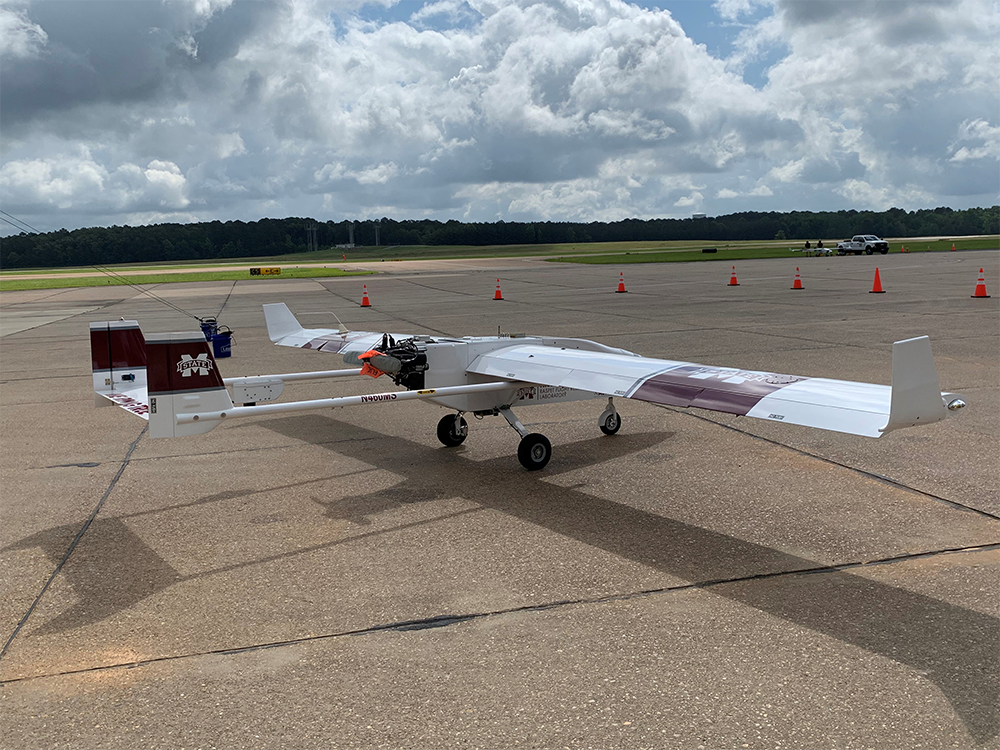 Through the collaborative efforts of Raspet and the Authority, the duo successfully obtained Federal Aviation Administration (FAA) authorization for today’s first flight in JAN’s controlled airspace, known as Class C. Class C airspace is a designation of up to 4,000 feet above ground level at airports with control towers, radar approach control and a certain level of activity.

“Today is monumental,” stated Paul A. Brown, JMAA CEO. “It’s a unique opportunity to be a part of cutting-edge advancements for the enhancement of aviation. We are eager to learn the results from today’s unique flight, as research will aid in our potentially long-term campaign for the future use of UAS here at JAN. We’re grateful for our partnership with MSU and are looking forward to continued collaboration and the success of this project.”

While unmanned aircraft systems already aid emergency officials with evacuation decisions, flood assessments, and the like, a complete integration into the national airspace system would enable them to safely and regularly operate in conjunction with manned aircraft during both emergency and non-emergency operations, while using many of the same air traffic management systems and procedures.

In today’s flight, an MSU TigerShark Block 3 XP aircraft lifted off and flew under the command of a remote pilot housed in a portable command center and positioned on the airport’s tarmac. During the flight, the remote pilot maintained two-way radio communication with air traffic controllers, complying with all instructions and using the same flight patterns and procedures as normal aircraft with on-board pilots. MSU’s TigerShark reached heights nearing 900 feet and is capable of flights up to 18,000 feet. It has an approximate 21-foot wingspan, weighs some 500 pounds, can carry nearly 100 pounds of payload and has the capability of flying for 8 to 12 hours without refueling.

“Today’s flight represents a significant milestone,” said Tom Brooks, director of MSU’s Raspet Flight Lab. “It’s another step toward unmanned systems becoming fully and safely integrated alongside manned aircraft – a key initiative necessary for UAS to reach their full potential, including expansions of their existing emergency response and disaster-relief efforts. We’d like to thank the Jackson Municipal Airport Authority for their strong partnership and the professionalism they brought to bear to make today’s flight successful.”

This historic event helps solidify Mississippi’s position as a national leader in innovative aviation technology development, and it demonstrates the potential of strategic partnerships to advance aviation capabilities in the USA.

About MSU Raspet Flight Research Laboratory
MSU’s Raspet Flight Research Laboratory is the nation’s leading academic research center dedicated exclusively to the advancement of Unmanned Aircraft Systems. Raspet is the only institute in the world designated both as the FAA’s UAS Safety Research Facility and as official UAS Test Sites for both the FAA and the Department of Homeland Security. Home to a fleet of the largest and most capable unmanned aircraft in academic use, Raspet conducts UAS research on behalf of federal agencies and commercial industry alike, and it remains a world leader in composite materials research. MSU is Mississippi’s leading university, available online at www.msstate.edu.

The Jackson Municipal Airport Authority (JMAA) operates two airports: Jackson-Medgar Wiley Evers International Airport (JAN) and Hawkins Field Airport (HKS). JAN is the busiest airport in Mississippi, situated in the Central part of the state and serving the Capital region of Jackson with over 3,000 acres of property. JAN has service to several of the world’s busiest global hubs and is home to the Mississippi Air National Guard 172nd Airlift Wing. HKS is a general aviation airport and is home to the Mississippi Army National Guard 185th Aviation Brigade.