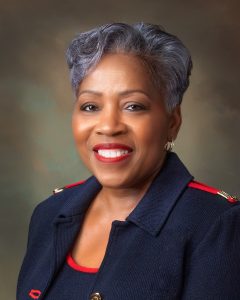 Ms. Lewis-Payton is an accomplished healthcare executive with almost 40 years of varied experience. Her humble beginnings in Birmingham, Alabama shaped a life-long commitment to ensuring quality healthcare services are available to vulnerable populations. This commitment led to a career in public service in some of the most challenging environments, including 30 years in the Department of Veterans Affairs (VHA/VA) and almost four (4) years as
Mississippi Medicaid Commissioner.

Because of her proven track record in identifying talent, developing leaders and building strong leadership teams, Rica was asked to establish a leadership talent institute for VHA. She was the first director of VHA’s Healthcare
Leadership Talent Institute (HLTI) and served in this capacity from April 2015 until her retirement in February 2016. In addition to aligning leader development programs for over 150 medical centers across the country, she established a common framework for creating a steady pipeline of capable leaders to assume executive roles. For 30 years, Rica had the great honor of leading in the Department of Veterans Affairs and ensuring quality healthcare services for men and women who took an oath to protect the freedoms we all enjoy. She was known for her unrelenting drive and pursuit of perfection in providing the healthcare services Veterans needed, deserved, and were entitled to receive. As COO (2004 – 2008), and later CEO (2012-2015), of a large geographic region that included all or parts of eight (8) southern states, a $4 billion budget, and over 20,000 employees; she was instrumental in rebuilding the Veterans healthcare system in New Orleans and lobbying Congress to secure funding to construct a new VA hospital.

One of the high points of her career was returning to her hometown of Birmingham and serving as CEO of the VA Medical Center from 2008-1012, the first female and African American in this role. With its academic affiliate,
University of Alabama at Birmingham (UAB), the VA Medical Center in Birmingham is one of the most complex in the VA system. Her outstanding leadership resulted in the Medical Center being recognized among the top 10 in quality and operational performance among VA facilities nationwide.

Because of her executive level experience in the Office of the Dean and Vice Chancellor of Health Affairs at the University of Mississippi Medical Center and two VA teaching hospitals in Jackson, MS and Birmingham, Rica was appointed to AAMC’s Council on Teaching Hospitals and Health Systems (COTH) and served from 2011-2015. In 2012 Rica received the Presidential Rank award, the highest recognition for a member of the federal government’s Senior Executive Service (SES) for “sustained extraordinary accomplishment.”

Rica was appointed as the first African American female State Medicaid Commissioner with responsibility for a $3 billion budget, twenty-five (25) offices across the state, and ensuring health care services for 25% of the state’s
population. During a period when the average tenure of a State Medicaid Commissioner was 18 months, Ms. LewisPayton served for almost four years (July 2000 until January 2004). In a highly charged political environment, she
successfully increased Medicaid coverage from 256,000 enrollees to 369,000, a 44% increase. Most of the increase resulted from her efforts in eliminating barriers and expanding the Children’s Health Insurance Program (CHIP).

Since retiring from VA in February 2016, Rica has devoted her time to developing others through executive coaching, providing leadership training, serving in Interim CEO positions, providing operational consulting to organizations offering health services in underserved communities, and serving on Boards. Rica has two adult children and lives in Jackson, MS.