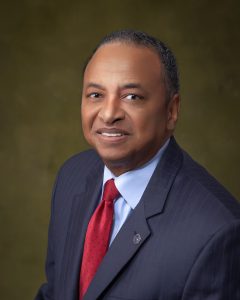 The Acting Chief Executive Officer of Jackson Municipal Airport Authority (JMAA) brings a storied professional career to Jackson. Most recently, John Means served as Chief Operating Officer for JMAA for nine (9) months before stepping up to lead the team of the busiest airport system in the state of
Mississippi (Jackson-Medgar Wiley Evers International and Hawkins Field). Mr. Means is excited for the opportunity to move JMAA forward, continuing to expand and upgrade one of the largest economic engines in the state of Mississippi.

Prior to coming to JMAA, John was Director of Facilities Management for the “World’s Busiest and Most Efficient Airport”, Hartsfield-Jackson Atlanta International Airport (ATL), where he successfully managed the maintenance, capital reinvestment and infrastructure repair planning teams. Mr. Means was
responsible for facility equipment inspections and the capital improvement plan for the 4,700-acre airport. With $20 Billion in fixed assets, ATL delivered 2,700 flight operations per day and 115 million passengers per year. John ensured that U.S. and local governmental regulators’ (i.e., FAA, TSA, EPA, NFPA, NEC, OSHA) safety codes were met.

Means also served as President, International Facility Managers Association’s (IFMA) Airport Council for two (2) years and has been a member of its Board of Directors for the last eight (8) years. John was also the President of IFMA’s Atlanta Chapter and served on its board for a decade, winning many distinguished member awards, and holds a Certified Facility Manager (CFM) certification (the top category offered by IFMA). He is an Accredited Airport Executive (AAE), the highest status offered by the American Association of Airport Executives (AAAE) & served as President of the Georgia Society of
Professional Engineers (GSPE).

John worked twenty (20) years with General Electric Company (GE) where he advanced from the role of Engineer to Marketing, Branch and Region Manager for the southeastern United States. He has degrees in Industrial, and Building Technology, Civil Engineering, and an MBA. John’s career has led him to move
four (4) times to a variety of cities, including Portland, Or., Atlanta, GA, Dallas, TX, and Jackson, Ms.

Means’ hobbies include golfing (since the age of 13), leading him to earn a golf scholarship and becoming team captain at Tuskegee University. He also graduated from the University of South Alabama in Mobile and City University, Bellevue, WA, where he earned his MBA. John is married with two (2) children, a son in education and a daughter who is a physician (MD).