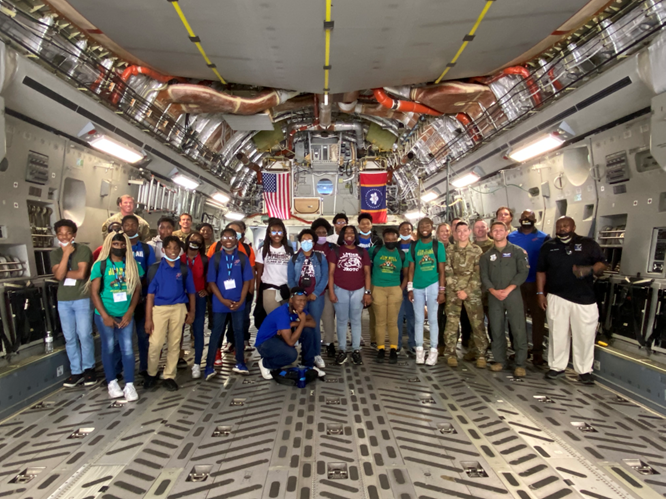 A deeply collaborative effort with external partners, including nonprofit organizations and
other public and private entities, provided students with extensive learning opportunities.
To wrap up the week, the Academy concluded with its Closing Ceremony at Jackson-Medgar Wiley Evers International Airport (JAN) to honor twenty-two (22) students for
successfully completing the rigorous JET-A “U 2 Can Fly” week of training and activities.

JET-A is a monumental opportunity for Jackson’s youth,” stated John Means, JMAA
COO/Acting CEO. We are grateful to be able to continue this partnership with JSU and
JPS in order to introduce and engage students with potential career opportunities in
aviation and aerospace.

This year’s guest speaker was Craig Irving, Corporate Sales Manager for the Eastern
Division based in Washington, D.C. for American Airlines. His message to the students
stressed the importance of staying true to who they want to be and expanding their
horizons to learn and push themselves to excellence.

Aviation connects you to different cultures, different ways of thinking, stated Irving.
That’s how you grow and always remember, that the world is much bigger than you can imagine. Decide who you want to be in life early.

Murrah High School 2022 graduate Ravion Lightfoot is the perfect example of the type
of future leaders this program is targeting. Lightfoot shared his accomplishments
following his two years of participation in the JET-A program. He has been accepted
into the Air Force Academy in Colorado Springs, CO, Naval Academy and West Point.
Lightfoot announced that he will be attending the Air Force Academy this fall.

The JMAA Education and Training Academy (JET-A) is a partnership formed between
the Jackson Municipal Airport Authority and its Board of Commissioners, Jackson Public
Schools, and Jackson State University. The overarching objective is to introduce high
school students to career opportunities in aviation and aerospace.

The Jackson Municipal Airport Authority (JMAA) operates two airports: Jackson-Medgar Wiley Evers International Airport (JAN) and Hawkins Field Airport (HKS). JAN is the busiest airport in Mississippi, situated in the Central part of the state and serving the Capital region of Jackson with over 3,000 acres of property. JAN has service to several of the world’s busiest global hubs and is home to the Mississippi Air National Guard 172nd Airlift Wing. HKS is a general aviation airport that houses two emergency response medical air transporters and the Civil Air Patrol.  It is also home to the Mississippi Army National Guard 185th Aviation Brigade.